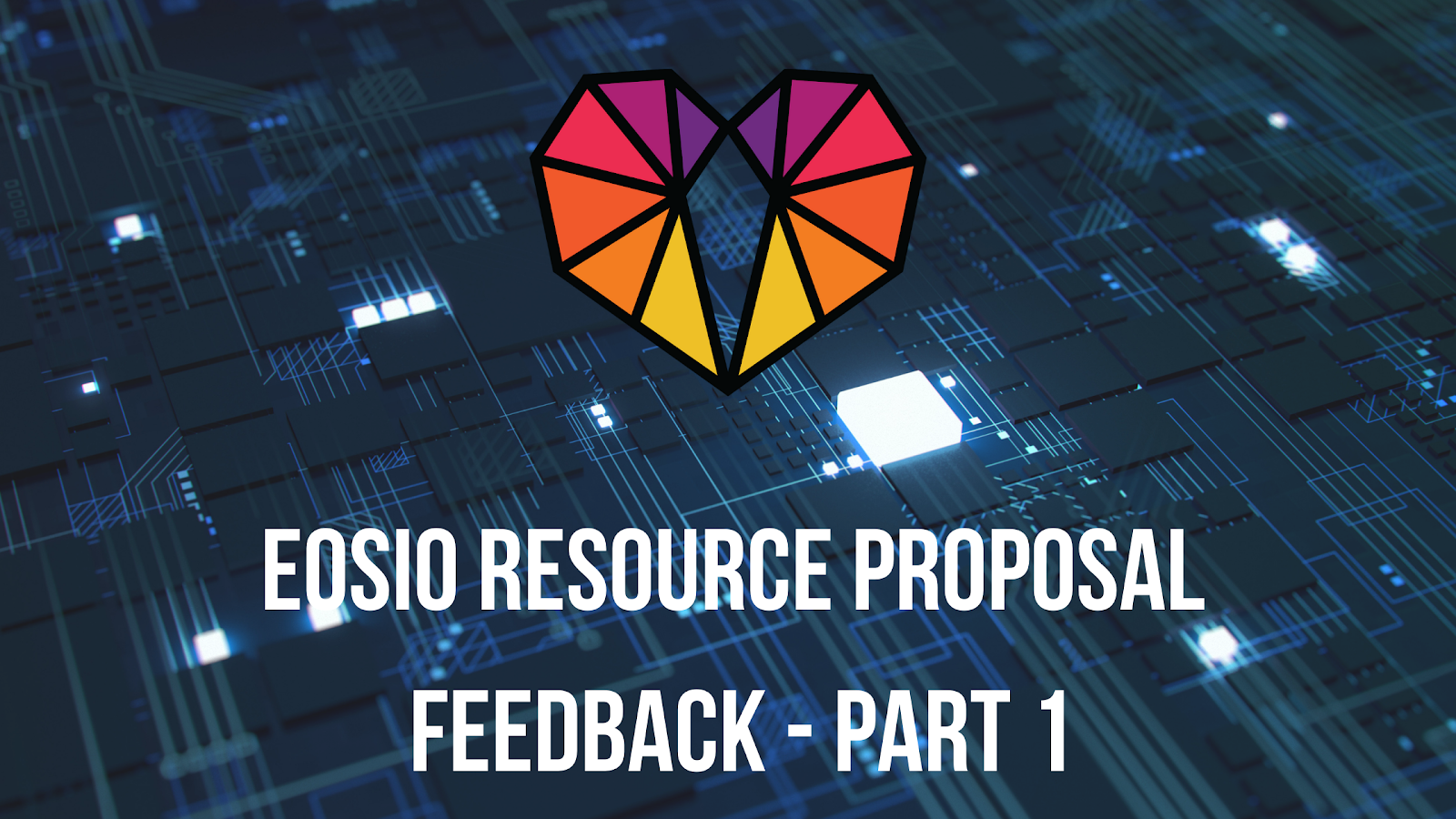 Resource models on the EOS Mainnet have been a contentious topic in the past. In fact, it can be classified as a “wicked problem”. Wicked problems are matters that are so intricate and conditional on various effects that it’s difficult to understand them, much less find a solution [1]. This is particularly true for the EOS network as confirmed by Dan Larimer’s assessment of the currently deployed Resource Exchange (REX) [2]. In December 2019, block.one officially proposed a new resource model that is supposed to address the shortcomings of the REX system [3] and has asked the EOS community and in particular block producers and dapps to provide feedback on.

Many EOS community members have provided great feedback on various aspects of the proposal. Dexaran explained the proposed changes on technical level by analysing the source code [4], EOS Rio did focus on the resource pricing and suggested some changes to the proposed pricing curve [5]. With EOS Dublin taking the most controversial stance of implementing any new changes in a forked chain and combining the new resource model with other governance changes like 1t1v (“one token, one vote”) [6].

In this article we are documenting our thoughts and feedback in relation to concerns / suggestions raised by other EOS community members first. We then provide our own spin and analysis of the new EOS Resource Model proposed by block.one, and give an outlook to further analysis required, some of which we are currently working on with other members of the EOS community.

Our thoughts in regards to other community feedback

The ‘Nothing at stake’ problem:

Regarding the ‘nothing at stake’ problem i.e. unused resources going to be utilised in mining raised in [4], we don’t believe this to be a long-term concern. While this might potentially be the case initially, we believe that once more “useful” services get deployed on EOS, users will use their resources more sparingly in order to be able to use those services and not waste them in mining. Another quite likely scenario is that those new services will rent the required resources on behalf of their users, which also will result in less capacity being available for mining. We believe that the issue of mining will naturally (and gradually) disappear with the network and provided services maturing.

One problem raised in [4] was that users will have to rent resources for 30 days when they might only want to transact once a week or less, which will result in a large percentage of the allocated resources for that user to go “wasted”. Similar problem was also voiced in [5].

We believe that this concern is overrated. There will certainly be some users that might prefer to rent resources themselves with some of those allocated resources going unutilised, however we believe the majority of users will be utilising third party providers (the likes of Fuel or Charm) to manage their resources for them (and paying a fee for this service).

A 30-day rental period is not going to be an issue for a business / dapp that requires large amounts of resources (and as we can see in our analysis further below, we believe that we should focus on those types of users when analysing the resource model at large).

EOS Rio in [5] suggests that a change in the pricing curve would further reduce wasted resources by keeping resources more affordable at the higher utilisation end of the curve.

While we agree with EOS Rio that there might be some optimisations required for the price curve, we believe that the price curve proposed by block.one is suitable to achieve the goal of keeping resources affordable up to a resource utilisation of ~90%. Having said that, there is not enough data available to give definitive predictions on resources pricing and more research needs to be done in this area.

Blockchain systems do not exist in a vacuum, they interact and co-exist with multiple physical and non-physical elements in connection to the surrounding environment. We have therefore decided to analyse the proposed new resource model from a different angle by employing systems thinking to begin unraveling and seeing how each stakeholder and issue interconnects with each other.

In order to achieve this, we adopted the universally recognized framework – the salience stakeholder mapping model developed by Mitchell, Agle & Wood 1997, to map stakeholders in a systematic framework and categorise them based on three core elements “power”, “urgency” and “legitimacy” and define them in their respective stakeholder classifications. We will not go into depth around these classifications but feel free to read up on them here.

[7] Mitchell, R, Agle, R, and Wood, D, 1997, Toward a Theory of Stakeholder Identification and Salience: Defining the Principle of Who and What Really Counts. The Academy of Management Review, 22(4), p.853.

GenerEOS is a social enterprise stand-by EOS Block Producer with a mission of promoting and supporting scalable and highly reliable block production whilst giving back to social causes and the wider community.

Please vote for ‘aus1genereos’ so we can keep working hard to add value to the EOS community.

← Prev: How to Vote on the FIO Blockchain Next: GenerEOS Joins the UX Network as a Block Producer →