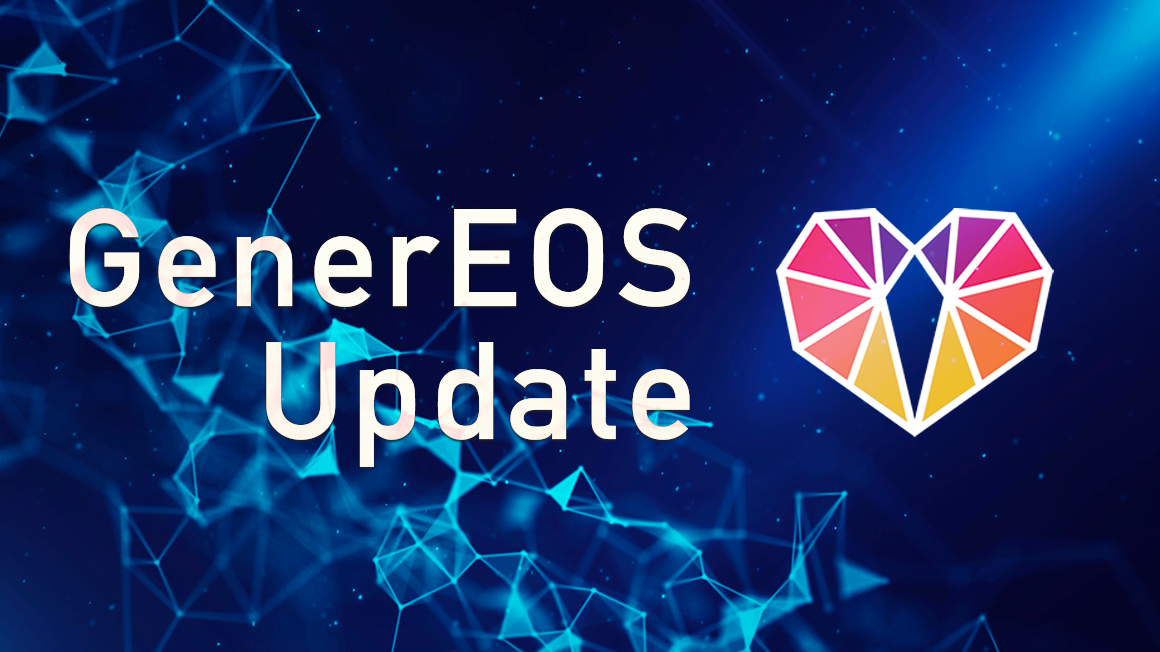 Six months into 2019 and the EOS landscape has continued with its rapid change. Against this backdrop, we at GenerEOS have been busy with our endeavours to grow the EOS community and quietly working on our strategic projects and partnerships.

We have recently expanded our team to include Ignatius Widjaja who has helped with our recent EOSIO Demux workshop series. Since he joined GenerEOS, his primary focus has been smart contract and backend development, EOSIO consulting work, infrastructure management and (spoiler alert!) our Charity DAC which aims to change the way charitable causes can access funding.

In May Jack Shi joined our team and he is currently focusing on maintaining and adding new features to EOStoolkit.io. He is also helping with other high-profile projects and other exciting products that will be rolled out later this year.

Two month before EOS mainnet turned ONE we thought it would be fun if someone created a “Happy Birthday EOS” video compilation with birthday wishes from the whole EOS community. So team GenerEOS took that on and started reaching out to BPs, Dapp teams, Proxies, and the general EOS community via Telegram, Twitter and emails to call for contributions. It was a lot of work to herd them all in but in the end we received close to 50 video contributions from every single continent of the world, which we then compiled into a beautiful happy birthday message; from the community, for the community. You can watch it here.

On June 1st, as all eyes were focussed on Washington D.C. for the Block.One Announcement Event, we held our very own Watch Party in Sydney. Hosting together with Eosphere and Sydney Blockchain Center, we had a record turnout that Sunday afternoon. The party goers enjoyed some amazing food & drink and participated in the fun EOS Quiz challenge. The winners of the day being Daniel Spiteri (TREOS) for the first part and team Emanate for the second part. We also had our team members, Tai and DataJunky attend the B1 event where they did a Live video-cross to Sydney where the delegates spoke to our Sydney audience. Watch the video here.

We are proud to have assisted Independent Reserve, one of the leading exchanges in Australia, to list EOS as a trading pair to fiat on their exchange. We hope this leads the way in mass adoption of EOS for Australians.

We have also engaged with ZebPay — a new entry to the Australian Exchange market. Check out our YouTube video here.

For those who’ve been following our workshop series, we have now run two separate workshops at the University of Western Sydney (UWS). We dived into EOSIO Blockchain and smart contract development as well as the Demux framework. We’ve also held introductory workshops at the University of Technology Sydney. For our most recent workshop check out the full article here.

In 2019 more and more side and sister chains of EOSIO have been launched. We have now implemented a universal solution to support all those and further side and sister chains in our eostoolkit.io. Currently, eostoolkit.io supports the EOS, Worbli, Telos, MeetOne and BOS Networks. Just switch to the network you want to interact with by selecting “Change Network” in the menu. Feel free to contact us if you would like us to support your network.

We upgraded the code base of Poorman token to make it compatible with the latest CDT version. We were also able to share this code base with the WordProof developers who incorporated it into their own token contract

GenerEOS joined the Meet.One side chain and has been an active producer since day one. We are currently at position #15 (see https://meetone.eosx.io/). We are committed to support and grow the Meet.One chain and we are excited to see the first exclusive dApps launch there soon.

Dapp support and promotion of EOSIO

GenerEOS are actively supporting other EOS community projects, such as EosPayout. We have also been a major launch partner for Emanate and we support the SignalX Trusted Token Offering (TTO). GenerEOS are also currently supporting several start-ups by providing technical advice in regard to EOSIO development.

We have also been busy organising local meetups and creating relevant content for the EOS community.

How to Stake Parsl Video

We have big plans for the future of EOS and GenerEOS. Here’s a sneak peak of what we’ll be working on in the second half of 2019 and beyond.

There’s no slowing down here as we work towards The Future of Giving.