AIRGRAB: Evolution Of The ICO 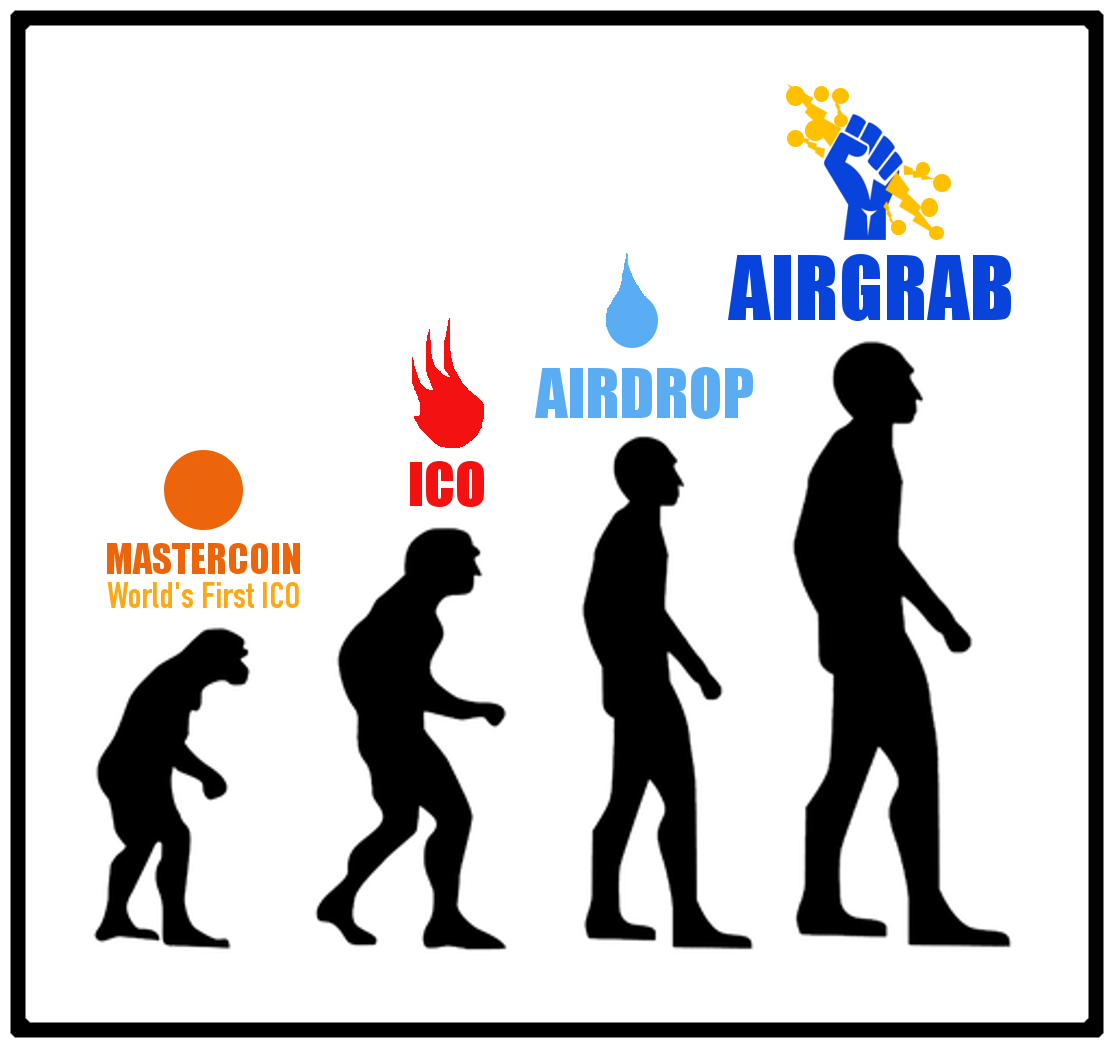 The very first ICO occurred in 2013 with a cryptocurrency called Mastercoin.

In 2012 J.R. Willett invented the concept of the ICO in a white paper named The Second Bitcoin White Paper which he announced in this Bitcointalk thread. The story goes that for a year and a half J.R. Willett tried to get people interested in his ICO concept but no one really cared. Willett didn’t have many entrepreneurial aspirations of his own, but he wanted to prove that his ICO idea would actually work, so he launched the Mastercoin ICO for that purpose. He used the Bitcoin blockchain to launch Mastercoin.

It did work, and random strangers began sending him Bitcoin, but it took an additional five years before the ICO model would explode onto the crypto scene. You could say that the model of “random strangers sending you Bitcoin after reading a white paper” proved to be a wildly successful model of raising cryptocurrency funds. Mastercoin was later renamed OMNI, and it’s still going even today.

In 2014 Ethereum raised 3,700 BTC in its token sale which was equal to approximately $2.3 million at the time. Even though J.R. Willett conceived of new ICOs being created on top of the Bitcoin protocol, Ethereum turned out to the blockchain where the vast majority of new coins were born at the height of the ICO craze.

“It’s a bizarre phenomenon that many people wish they could experience: pennies, dimes, and quarters — and even bills — falling out of the sky. We’re not talking about finding coins on the street. We’re talking about money materializing seemingly out of nowhere, appearing mysteriously in houses and apartments with no easy or logical explanation.” –https://www.thoughtco.com/money-from-heaven-2593136

The developers of a brand-new coin would send the free airdrops to Ethereum wallets that contained some amount of ETH. They could get these wallet addresses directly from the Ethereum blockchain. As long as a person had some ETH in a blockchain wallet, then airdrops would magically appear in them. This literally is the definition of “raining free money.” Now most of these airdrops turned out to be total failures, and worth nothing, but the model of airdrops still is quite popular. Receiving “free money” without having to do anything to get it appeals to pretty much everyone on the planet.

Governments around the world have been cracking down on ICOs, and this could be one reason the airdrop model has gained widespread popularity.

If you give something away for free, there’s no regulatory risk involved. Airdropping your token into thousands or hundreds of thousands of wallets equals exposure and marketing reach. Of course your product or service has to be good in order to make any sort of difference, because now you’re competing with thousands of different coins.

On the EOS blockchain, new projects began airdropping their tokens into the genesis snapshot EOS wallets. Some of the early airdropped tokens were eosDAC, BLACK, IQ and KARMA. But, as the RAM prices shot up wildly, airdropping a large amount of tokens became prohibitively expensive. On EOS, developers have to buy RAM in order to do transactions on the blockchain, and sending airdrops became costly.

The high cost of RAM gave rise to an entirely new airdrop model, the airgrab. In the airgrab model, users consume their own small amount of RAM in order to get the free tokens. This model is much more economical for developers. In this model, only people who are either interested in the project, or super hungry for free tokens will bother to do the required steps to get the airgrab.

You can see a list of current EOS Airgrabs here:

The originator of the airgrab on EOS, as far as we know, is Syed of EOS Cafe Block, and the very first project to use the airgrab model was the POOR token, which we developed. We created the POOR token initially to test out the airgrab model, then we also sent it to reward people who voted for EOS Block Producers. You can airgrab a number of tokens using the tool we developed: https://eostoolkit.io/airgrab, which is compatible with the Scatter wallet. We created the EOSToolkit as a multi-purpose web interface that serves many needs for the EOS community.

Interview With Syed of EOS Cafe Block, Originator of the Airgrab Model

GenerEOS: What series of events occurred that inspired you to create the concept of the “airgrab”?

Syed: The airgrab idea came as a spark of ingenuity from Nathan Rempel from GenerEOS talking to me about how to make airdrops cheaper for developers.

G: Is there a story of how you thought of this?

S: In the first few weeks of EOS, it became clear that there were airdrops that had a project behind them and others done for fun or spam.

In my mind, I had always imagined an airdrop to be similar to an airplane flying around the world parachuting down tokens to anyone and everyone. Instead of developers paying for these expensive airdrops to individuals that may not want the airdrop, splitting up the total cost among thousands of individuals was a natural progression.

For a small cost of 240 Bytes of RAM, you could grab different types of tokens that were interesting or valuable.

Instead of being dropped these tokens, you had the right to choose which tokens to grab, and that is where the idea of an airgrab came from.

G: What was the very first coin that became an airgrab?

S: I believe the first ever token that became an Airgrab was the POOR token. It was essentially created by Nathan to popularize the methodology of carrying out an airgrab, and familiarizing end users to the concept. The project has been a great success, and airgrabs are now an essential cornerstone of the EOS ecosystem.

G: Is EOS the only blockchain that is using the airgrab concept, or is it gaining traction in other chains?

S: EOS is the first blockchain that has popularized the concept and has used it successfully. Prior projects have attempted programs where users transfer a small amount of Ether to an account to cover the gas costs of transferring their token to the sender. These programs are not as intuitive for the end user and are permanent costs. With newer airdrops done through the open action, there is the ability to transfer away all your tokens and close your balance field to recover the initial RAM cost of the user.

note: There have been dApp projects on STEEM that have been using the airgrab model, but they were not named airgrab. HUNT tokens are one example from the Steemhunt dApp.

What do you think about the airgrab model? Leave your comments below.